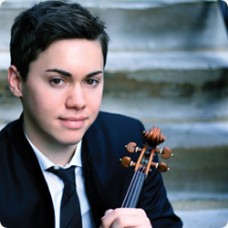 Violinist Benjamin Beilman’s “handsome technique, burnished sound and quiet confidence showed why he has come so far so fast.” (The New York Times) He is the recipient of both a 2012 Avery Fisher Career Grant and a 2012 London Music Masters Award. His numerous accolades have thrust him onto stages across North America and Europe as soloist with the Edmonton Symphony, L’Orchestre Métropolitain de Montréal under Yannick Nézet-Séguin; and the Kansas City Symphony as well as the Tonahlle Orchestra in Switzerland under Sir Neville Marriner. In addition to his Wigmore Hall solo recital debut, Mr. Beilman appears in recitals at the Mostly Mozart Festival, Merkin Concert Hall, at the Candlelight Concert Society, The Friends of Music Concerts, at the Festspiele Mecklenburg-Vorpmmern in Germany, and as part of the Rising Stars Series in Basel, Switzerland.

He has appeared as soloist with L’Orchestre Symphonique de Québec at the International Festival at Domaine Forget; with the Malaysian Philharmonic, the Hilton Head and Billings symphonies; and performed the Jennifer Higdon Violin Concerto with the South Dakota and Glens Falls symphonies. The Philadelphia Inquirer praised his Kimmel Center debut, performing the Bruch concerto “in heroically broad strokes. What a compelling performance.” Recital appearances include the Philadelphia Chamber Music Society as recipient of Philadelphia’s 2010 Musical Fund Society Career Award, the Buffalo Chamber Music Society, the Isabella Stewart Gardner Museum, MusicFest Vancouver and the Krannert Center for the Performing Arts, among others.

Mr. Beilman made his Philadelphia Orchestra debut with conductor Rossen Milanov in June 2009, performing Beethoven’s Romance, which The Philadelphia Inquirer praised for its “emotional weight” and “distinctive, full-bodied sound.” He was a 2007 Presidential Scholar in the Arts and recipient of a Gold Award in Music from the National Foundation for Advancement in the Arts. He has been heard on National Public Radio’s “Performance Today” and “From the Top;” on WQXR’s McGraw-Hill “Young Artists Showcase;” and Chicago WFMT’s “Impromptu.”

Mr. Beilman currently works with Christian Tetzlaff at the Kronberg Academy in Germany, supported by the Dieter and Elisabeth Feddersen Scholarship.  He graduated from the Curtis Institute of Music in 2012, where he worked with Ida Kavafian and Pamela Frank.  His earlier studies were with Almita and Roland Vamos at the Music Institute of Chicago.