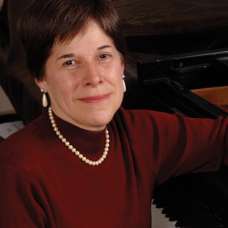 A native of Detroit, Cynthia Raim graduated from the Curtis Institute in 1977 after studying with Rudolf Serkin and Mieczyslaw Horszowski.

Ms. Raim has collaborated with David Soyer, Samuel Rhodes, and the Guarneri and Johannes Quartets, among others. Annually, she gives recitals throughout the world, participating in many leading international music festivals such as Marlboro, Ravinia, Mostly Mozart and Santa Fe.