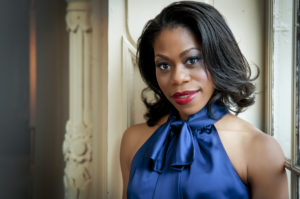 The Musical Fund Society is pleased to announce that the recipient of the 2020 Career Advancement Award is mezzo-soprano Chrystal E. Williams. This Award is given annually to a musician under the age of 40 who has had a meaningful connection to Philadelphia during the time he or she was developing as an artist. The prize has been awarded to over 20 artists, many of which have gone on to have internationally acclaimed careers, including Eric Owens, Soovin Kim, Marc-André Hamelin, Marietta Simpson, and Natalie Zhu.

Chrystal E can be fairly described as a rising opera star. She made her MET debut last fall in Philip Glass’s Akhnaten and has performed a good deal of contemporary opera around the world. She created the role of Rebecca in Yardbird for the Philadelphia Opera and has reprised it in Atlanta, Arizona, Seattle, and with the English National Opera. Her onstage, non-modern opera repertoire is continually expanding—she’s sung Rosina, Hansel, Olga (Eugene Onegin), and Charlotte (Werther), among others.

Orchestral concert performances include appearances with the City of Birmingham Symphony Orchestra under Simon Rattle, and she’s sung Bach with the Philadelphia Orchestra with Yannick Nézet-Séguin on the podium.

The Award includes both a $5,000 cash prize and a solo recital presented under the auspices of the Philadelphia Chamber Music Society, during their 2021-2022 season.